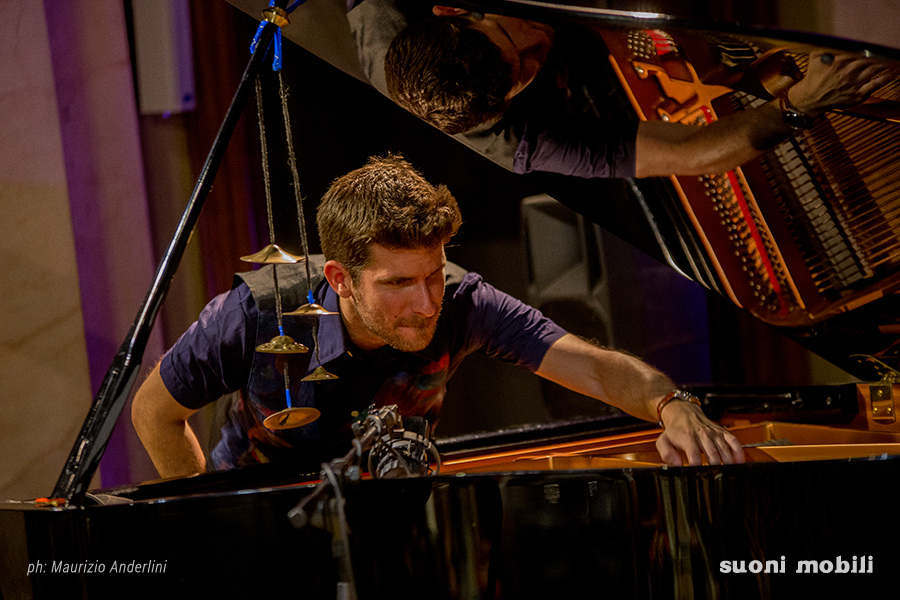 “Prodigy”, “magician”, “the total musician”, “prestidigitator”, “magnetic”, “off-the-charts”. All this and more has been said by the press about Marco Mezquida. Having made only thirty years old, it is clear that much more is yet to be said. His irruption illuminated the scene and, ever since, there has been a consensus among media, programmers, musicians and audience to point out Marco Mezquida as one of the most dazzling appearances on the European music scene in a long time.
To say that Mezquida shines equally as composer, pianist, improviser, accompanist and bandleader, that he is eclectic and versatile, is to name the obvious. But it is, also and barely, a description of the surface of his world.
Above all, Marco is a playful and unpredictable artist, a universe in which to fall, a torrent to surrender to and let go.
His creative power is overwhelming, and his resources seem endless. Jarrett, Schubert, Evans, Rachmaninov or Bley, to name a few, merge exquisitely into Marco’s musical DNA. Marco lets them all in, invites them to play in his music, integrates them into his stream of expressiveness, at the unexpected intersections that have become a hallmark of the musical organism that Mezquida represents.
His unlikely agenda shows him in the intimacy of the solo piano, or accompanied by orchestras, dance projects, duets, trios, jazz, as well as in his original approaches to Ravel, Haendel or Chopin, flamenco, or popular Latin American music.
He could be depicted as a young artist with a bright future, except that his achievements, although improper of an artist who has just reached thirty, speak in an irrefutable present.
The list of artists with whom Mezquida has shared stage, projects or studio is endless. Among them, renowned figures like Lee Konitz or Bill McHenry. Similarly he has been present in venues of twenty four countries, including Marciac, Budapest Music Center, Conde Duque of Madrid, Jazzaldia, Jazzahead!, Kölner Philharmonie ORF Auditorium in Vienna, SFJazz, or Jazz in the Factory in Sao Paulo.
His colleagues of the Association of Jazz Musicians and Modern Music of Catalonia have chosen him “Musician of the Year”, not one, but four times over five editions. He has performed his solo piano concert at the Palau de la Música; the Voll Damm International Jazz Festival of Barcelona 2017 dedicates a Portrait of Artist in which he  presented five of his innumerable projects, both privileges usually reserved for artists with extensive trajectories.
The flight of Marco Mezquida has just begun and his baggage is already so lush and intense that abbreviating becomes impracticable. Let us, then, call the words chosen by Maria Camps to define Marco: “…explorer of sounds, creator of atmospheres, multiplier of musical presences, one-man-orchestra.”

One of flamenco’s most sensational guitarists, Juan Gómez “Chicuelo” meets the piano of Marco Mezquida. The result is a perfect “Conexion” between jazz and flamenco which features impetuous rhythms and crescendos.