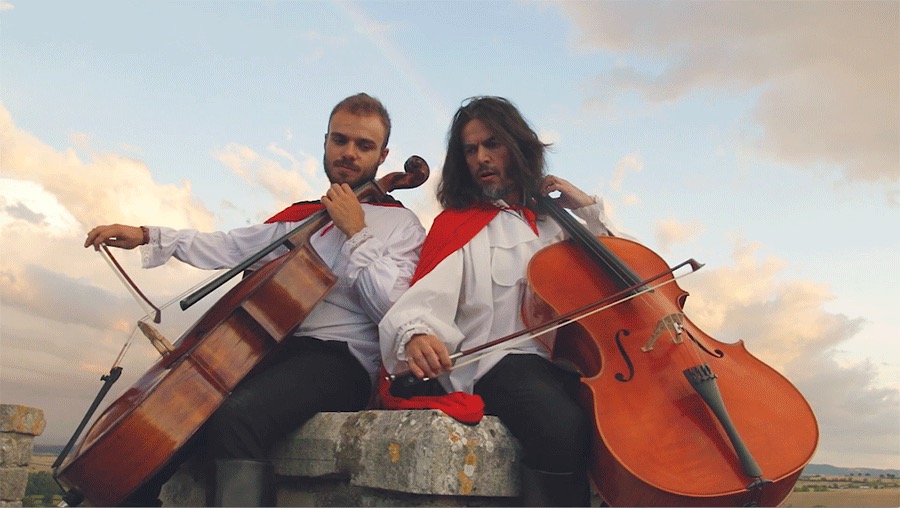 The BaRock side of the Cello

The band is extremely rare if not unique in the world, both as instruments and repertoire. The range performed by GuerzonCellos is vast and reaches from baroque to jazz and rock, peppered with their own compositions. Outstanding energy meets virtuosity making their concerts an unique experience. The Bologna based duo consists of Tiziano and Enrico Guerzoni, son and father, who do not only play the cello in a way seldomly heard before, but they celebrate their instrument as an incredibly eclectic tool of musical expression. Furious interpretations of baroque classics as well as creative re-arrangements of modern jazz and rock songs render their concerts into a highly sophisticated performance. Tough the peak of their technical and creative skills is found in their own compositions when Tiziano and Enrico mix musical influences since the 17 th century including psychedelic, jazz, improvisations and traditional folk elements. An irresistible combination !

Tiziano Guerzoni studied cello at the Conservatory of Bologna, at the Accademia Santa Cecilia in Rome and at the Pôle supérieur d’enseignement artistique in Paris where he obtained his diplomas with honors. Tiziano has worked with various international orchestras such as Arkè Orchestra, Cembal Orchestra, Orchestra Senza Spine or the Conservatory Orchestra Leipzig taking the role of first cello or soloist. With Giovanni Solima he performed at the Cello Biennale in Amsterdam, the L’Auditori theatre in Barcelona and the Accademia Nazionale di Santa Cecilia in Rome. Other collaborations brought him also to the Teatro Comunale di Bologna and the Festspielhaus Erl (Austria).

Enrico Gurzoni studied cello at the Conservatories of Bologna and Ferrara and is today one of Italy’s most experienced and chameleonic musicians. During his career as cellist and composer he did high level collaborations in every field and genre, mainly Jazz, Pop and chamber music – often as first cello and soloist. Enrico worked with Italian and international artists like B. McFerrin, Solisti Veneti, L. Pavarotti, R. Muti, M. Nyman, Trilok Gurtu, Zucchero, Arkè String Quartet, P. Fresu, A. Ruggiero, F. Battiato, A. Bocelli and many more. GuerzonCellos have performed in Europe (Italy, France, Austria) and in China. In 2021 their second CD is out for Da Vinci Publishing, Osaka (Japan).

GuerzonCellos have performed in Europe (Italy, France, Austria) and in China. In 2021 their second CD is out for Da Vinci Publishing, Osaka (Japan).