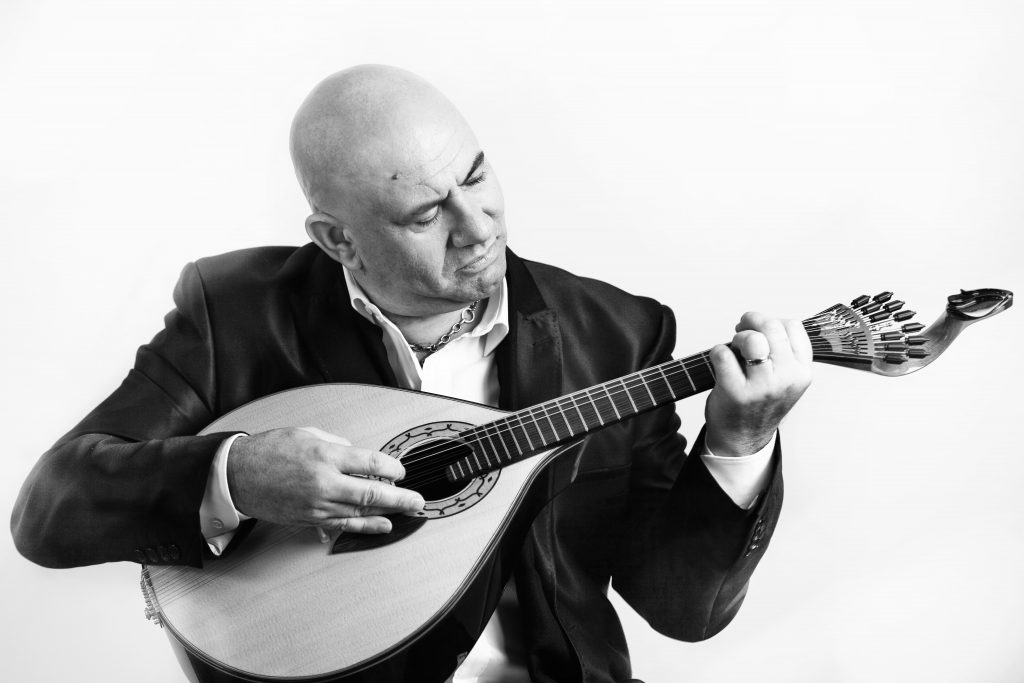 Born in Almeirim on the 23rd December 1966, Custódio Castelo built (and played with) his first musical instrument at the age of seven. When he was thirteen someone offered him a “real” instrument, an acoustic guitar, which enabled him to join both bands that played Portuguese popular music and rock bands. When he was 13, he discovered the sound of the Portuguese guitar through the CDs of Amália Rodrigues and soon it became his chosen instrument. Since early times Castelo was considered a wonder due both to the audacious form he played the Portuguese guitar and to the talent he showed, which was acknowledged by famous names of traditional fado, such as D. Vicente da Câmara, Manuel de Almeida, Fernado Farinha, among others. At the age of 18 he starts composing and two years later Jorge Fernando invites him to record an album, thus beginning a musical partnership that keeps going on until today. Custódio Castelo accompanied Jorge Fernando in every fado CDs, they both recorded and produced works for artists like Argentina Santos, Mariza, Ana Moura, Maria da Fé. Gonçalo Salgueiro, Fernando Maurício, Raquel Tavares, among others.

Due to his expertise and to the beauty of the sounds he gets from the guitar, Custódio Castelo breaks barriers among eventually different musical languages. He records the album “Only early in the night” with the Symphonic Orchestra of Lithuania and shares the stage with several musicians and singers of other areas: Richard Galliano (accordion), Arrigo Cappelletti (pianist), André Dequech (piano). Daniele di Bonaventura (Bandoneón), Davide Zacaria (Cello), Ben Wolf (Bass), Leonard Amuedo (classical guitar), Olga Pratz (piano), Cármen Linares, Ana Salazar…
As a soloist, Castelo carried his virtuosity and brilliant compositions to the world’s most famous music festivals as, for example, the International Festival of Belo Horizonte (Brasil), World Music Festival of Philadelphia (USA), International Festival of Rabat (Morocco), North Sea Jazz Festival (Dan Hag, Haia), Festival du Sud (France).

in cooperation with Carlos Bartilotti Management